Hey, remember the Ghostfacers? They were really funny and hilarious.

Here are pictures of me with half of the Castiel cosplay. 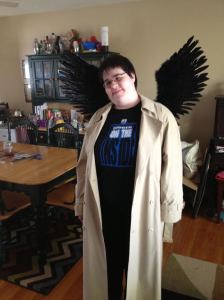 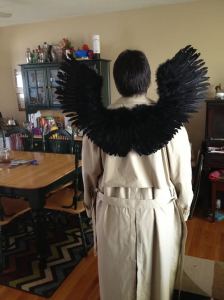 About: Joel Robinson (KTMA -Season 5) Then later Mike Nelson (Season 5 – 10) Are aboard the satellite of love alongside their robot pals Crow T Robot, Servo, and Gypsy. And also Magic Voice (Known as Cambot). They are sent bad movies and forced to watch them. They also riff as well. There was also segments they do during the episode. The villains were as follows: Dr. Clayton Forrester (KTMA – Season 7 (Final Appearance) + The Movie) And Pearl Forester (Season 8 – 10 + Made an appearance as Dr Forresters Mother in Season 7)

Would i recommend: If you enjoy bad movies and like the riffing Heck Yeah!

Other Info: It was first aired on KTMA, then it later aired on The Comedy Channel/Comedy Central. It was cancelled in 1997, Then it was picked up by The Sci-Fi Channel (Known now as Syfy) for the remaining seasons until its final cancellation in 1999.

There was also a MST3K movie in 1996. Its actually not a bad movie.

Whoever came up with that concept was a bit over their head.

Supernatural is known for having very good endings. But sometimes those endings can make you cry. Each season has its own different ending. If I had to pick which Season’s ending make me cry the most it would be a tie between Season 2 and Season 9.

I just don’t know what will happen next for our heroes. Will Sam, Dean and Castiel end up facing a threat greater then the previous threats they have faced in the past? Or will it be something far worse? We will have to wait and find out.

Carry on my wayword son

There will be peace when you are done.

Lay your weary head to rest

Don’t you cry no more.

Hal-Con in 30 days! This is going to be awesome!

We are counting down. Its the final countdown! *random guitar solo*

Happy October! Where the crisp leaves fall onto the ground, Pumpkin Pie can be eaten, Halloween and its wonderful spookyness and of course Supernatural Season 10.