Aired: 1998-1999 (Date, month, and year vary by broadcast) (There were also re-runs, and it was broadcasted in various countries as well)

About: A ragtag of traveling bounty hunters on a ship known as The Bebop go on a hunt for criminals and bring them in for bounty money and also go on adventures while dealing with various issues and situations. Set in the year 2071.

Would I recommend: If you are a fan of anime, and are interested to check it out I highly recommend it. You can find it on Netflix (Varies by country) Or you can hunt down for a DVD or Blu-ray release of the show on Amazon or Ebay.

You can also find VHS copies of the show as well but it varies on price and where you get it from.

Other Info: There was a Cowboy Bebop movie released in the early 2000’s called Cowboy Bebop: Knockin’ on Heavens Door (Alt Title: Cowboy Bebop The Movie for North America) This was released on DVD and Blu-ray. And you can find it on Netflix (Varies by country)

Extra Info: There was a Netflix Adaptation of Cowboy Bebop made in 2021. However, it only lasted one season before being cancelled by Netflix. If you are interested, you can check it out on Netflix.

Final Info: The English Dub is the most popular dub since it has a stellar voice cast. The Japanese Dub is a popular one as well. 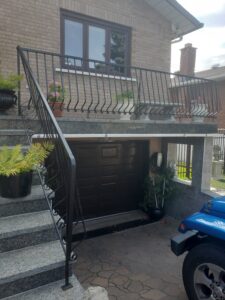 I haven’t updated this blog recently, I’ll try to post when I can but I am going to be occupied for the time being.

I always find it really cool to watch tv shows/movies in different languages. Because not only you get to learn the language but see how it was aired/shown in a different language. Even better, you can have subtitles to follow along to if you own a copy of the tv show/movie itself on various formats.

About: A town has been overrun by man eating aliens disguised as humans in blue shirts. A rag tag group of humans try to stop the aliens before it is too late.

Review: The music was really weird, it was gross as in.. way too gross. And the effects were cheesy. The 48min mark was the closet that was gotten into the movie itself. I would only recommend this movie if you enjoy obscure cult movies and can stomach the gross out scenes.

About: In the year 3000, Earth is a wasteland and the remaining humans are being used as human slave labors for the Psychlos, a race of human like aliens.

Review: The scenery were nice, but the green/blue screen effects were not that great. As for the plot itself.. it was an interesting idea but I think they were trying to fit everything all too much into the movie itself. Turel is really greedy and his voice reminds me of Metatron from Supernatural. The titled camera angles didn’t help either since it looked like it was filmed on a slope. As for the tinted scenes, it was colorful but overused in some scenes.

Other Info: There were plans for spin-offs and sequels/follow ups but that never emerged.

Additional Info: This movie got Razzie Awards. And it was cited as one of the worst movies ever made.

About: Set in a dystopian future, there is a popular sport called the Transcontinental Road Race in which drivers compete against each-other and gain points during the Race.

Review: I actually saw this movie, and to be honest it wasn’t that bad.

Other Info: Sylvester Stallone is in the movie as one of the drivers.

About: A spin off of the tv show 21 Jump Street starring Richard Grieco.

Would I recommend: If you are a fan of the 21 Jump Street tv show, and want to check out this spin off then I would recommend it. However, if you are just interested to see what spin-offs were like back then, I will still recommend you check it out.

Other Info: This show lasted one season before being cancelled.

Extra Info: There are two DVDs out there of the show. One is an Australian release by Beyond Home Entertainment, and the other is released by Mill Creek Entertainment. Depending on what DVD you may come across there may be some changes. On The Mill Creek Entertainment DVD, The theme song Hot in the city by Billy Idol was unable to be used because negotiations didn’t go through so it was replaced with a different song called Hot Summer Night. Also, an episode called Someone Stole Lucille (Episode 9) was not put on the set due to music issues.

About: It’s about a group of young police officers who go undercover to investigate crimes in various teenage venues. It also goes into certain topics which I won’t list here.

Would I recommend: Yes, I would. Young Johnny Depp is in it and it’s really cool.

Other Info: There was a spin-off called Booker which lasted one season. There are also two movies 21 Jump Street and 22 Jump Street.

Extra Info: There are DVDs of the show 21 Jump Street out there but your most likely going to find the Mill Creek Version. Anchor Bay Entertainment used to sell the DVDs but they are out of print and have been discontinued in 2010, so if you have any of those DVDs in your collection they are rare. You can also check e-bay and amazon since they sell the DVDs there. You can also go to thrift shops if you are lucky enough to find them. There are also French and German versions of 21 Jump Street as well on DVD.

Additional Info: Due to low ratings, the show was cancelled after Season 4 on Fox. It was then moved to syndication for Season 5 (The Final Season) on other Fox affiliates. Oh, and Johnny Depp left the show after Season Four.

Fun Fact: Holly Robinson who plays Judy Hoffs on the show, sang the theme song with Johnny Depp and Peter DeLuise doing the Jump section of the theme song.

About: It follows Sam Beckett (played by Scott Bakula), a man who has become stuck in the past after a time travel experiment has gone horribly wrong. He tries to alter events while attempting to return back to the present. He is aided by a hologram version of his friend Al Calavicci (played by Dean Stockwell) who is motoring Sam’s present timeline.

Would I recommend: Yes, I would. There is only 5 Seasons of the show though but its worth the watch.

Other Info: There were plans for a Quantum Leap and Mangum P.I. Crossover but that never happend. It would of been really cool to see that.